Suvarnabhumi Airport terminal is approximately 30 km east, approximately half an hour from the broad Bangkok CBD area, depending on traffic and time of day. The most direct route is via the raised freeway though there are alternative routes which may take longer due to the Bangkok traffic.

From Suvarnabhumi Airport to Hilton Millenium 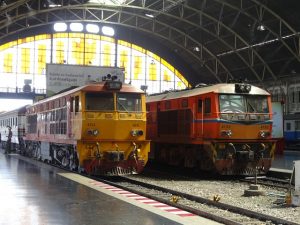 The Airport Rail Link (ARL) is a sub-urban train service that takes you directly from Suvarnabhumi Airport to the city center and vice versa. It runs from 06:00-midnight and the entrance is on the First Floor of the airport.

The City Line trains departs every 20 minutes and stops at all stations on the way to and from the airport. The total travel time between Phaya Thai terminal station (downtown) and the airport is approximately 30 minutes.

Phaya Thai Express is a non-stop service between Phaya Thai station and the airport. Trains depart every 30 minutes and the travel time is 17 minutes.

Makkasan Express is another non-stop service between Makkasan City Air Terminal and the airport. The MRT (underground) Petchaburi Station is about 300m from the Makkasan Interchange Station.

Airport limos cost about 3 times the price of a taxi but are very comfortable and drivers almost always speak enough English to get you where you need to go with no confusion.

You may also order a hotel limousine to collect you from Suvarnabhumi Airport through the Millennium Hilton Bangkok Hotel. The journey normally takes around 45 – 60 minutes
Please contact reservation for prices and to reserve your limousine: +66-2-442-2000 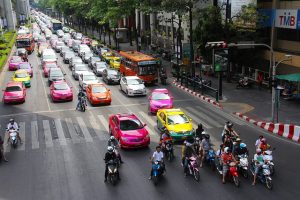 Metered taxis are the easiest way to get out of the airport and to your hotel. Taxis are available outside the arrivals hall. It is advisable to book taxis at the service counters (Telephone: + 66 2 132 9199). There is a fee of 50THB to be paid to the driver in addition to the fare, as well as toll fees on the expressway. The cost from the airport to the Hilton Millenium is approximately 500.00 THB.

Public buses run 24 hours a day from the airport. The journey time to the city center averages about 45 minutes, depending on traffic. Local buses run from the Public Transport Centre (Telephone: +66 2 246 4262), which is reached via a shuttle bus from the terminal. Routes connect to various destinations in Bangkok.

The Bangkok train system has an above-ground network called the Skytrain (BTS) and a subway line called the MRT.
The Skytrain has two lines, the Sukhumvit Line and the Silom Line.
Skytrain lines cross at Siam Square and connect to the river ferry system at Saphan Thaksin.
There is only one subway line. It crosses the Skytrain at two stops – Asok (called Sukhumvit on the subway system) and Sala Daeng (called Silom on the subway system).

The BTS Skytrain is undoubtedly the swiftest way to get around, and can whisk you right where you want to be in no time at all. Fares start at 15THB per one stop, and various travel cards can be purchased for multiple use of the BTS. Please refer to fare information here.

The Sky Train is an efficient and convenient way to navigate around the inner city at a low cost. It is an elevated train that runs through the main business districts, but doesn’t go ’everywhere’ (i.e taxis and tuk tuk rides are still needed). Train stations are well marked and the service runs between 06:30 and midnight.

Fast and efficient, the Mass Rapid Transit network (MRT) serves 18 stations and stretches for 20 km in a horseshoe shape from Hua Lamphong in the South (near Chinatown) to Bang Sue in the north. Trains arrive every 5-7 minutes, and connect to the BTS Skytrain at Sukhumvit and Silom stations. There are interchange stations at Silom and at Asoke where you have the possibility to change from the subway to the Skytrain and the other way around. Magnetic chips and cards can be bought at the counter or the available machines. Cards can be recharged at the counter with any amount.
For further information, please visit the website.

Make sure the meter is on and show the starting price of 35 THB. At night time, taxis are the most convenient, as the Skytrain and Subway do not operate after midnight.  Be aware that you can get stuck in some major traffic jams during morning and evening rush hours, especially on a Friday. The meter runs on a combination of both distance and time.

In a city teaming with traffic like Bangkok, an easier way to experience Bangkok is to hop on the Chao Phrya Express boats that run along the river in both directions. A boat runs every 20 minutes, but in the rush hours they run about every 5 minutes. For 20 THB you could ride the express boat from the “Central Pier” (Ta Sathorn Pier, under the Saphan Takin BTS station) until the end line at Nonthaburi. The fascinating journey takes about an hour. It is also a fast way to get to the Grand Palace at Ta Chang Pier, and other interesting locations.
For further information, please visit the website.

For shorter distances motorcycle taxis can be found on many street corners. This is helpful especially for accessing the Skytrain (BTS) or the Subway (MRT). The driver should supply you with a helmet which you are required to wear.
For further information, please visit the website. 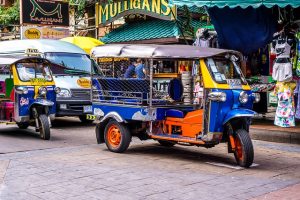 The Tuk-Tuk is a motorized three wheeler which is seen all over the city. Since it does not have a meter, e prices need to be negotiated. It is not recommended to use them as a normal form of transport as a taxi is cheaper, safer, and has air-conditioning!  Be aware that around the main tourist areas, some Tuk-Tuk drivers are not honest.
For further information, please visit the website.

There is a huge network of public buses in the city, but little English language route information is available.